East Bengal FC will be all set to lock horns against Odisha FC in this crucial ISL encounter. Welcome to the EBFC vs OFC Dream11 team prediction today and match preview.

East Bengal FC will come here after an important win in their last match which should keep them focused on maintaining consistency necessary to maintain a stronger performance.

Odisha FC on the other hand come here after losing their last match with 3 wins in their last 5 games which could only push them further to retain their winning form in this contest.

Odisha FC should win this match by a close margin.

Michael Soosairaj and Naveen Kumar are injured for this match.

Kamaljit Singh (8.0 Cr) was able to keep his place in front of his goal with 3 saves and 1 clean sheet in the last match against BFC which can push him to find his form.

Charalambos Kyriakou (8.5 Cr) was able to find 22 accurate passes along with 2 interceptions that helped him maintain a defensive line along with his 3 chances created in the last match that can push his performance.

Carlos Xavier (9.0 Cr) is fantastic with his interceptions throughout the series out of which he was able to create 5 along with 1 goal conceded which should keep them focused on this contest.

Sahil Panwar (8.5 Cr) has shown his ability to manage his attacking skills well with his defensive capabilities that automatically improved his contributions in the last 2 matches.

Jordan ODoherty (9.0 Cr) has managed to become the highest scorer for his team after scoring his second goal of the season which is just a bonus to his other contributions throughout the match.

Naorem Mahesh Singh (7.0 Cr) was able to win 5 interceptions with 1 tackle that can allow him to provide a more attacking style for this match that can make him an important threat.

Nandhakumar Sekar (8.0 Cr) has continued to work well to help out the attack and defense that earned him a crucial goal that can continue to boost his focus making him our prime choice.

Saul Crespo Prieto (8.0 Cr) has created provided 22 crosses throughout the series that has earned them 3 assists which can allow him to continue with his several attempts with a consistent form.

Cleiton Silva (9.0 Cr) was able to score a crucial goal to keep his side in the game during the last match that could enhance his abilities to fight back with a similar momentum as a potential game changer.

Diego Mauricio (9.0 Cr) needs to bounce back to his attacking ways after failing to add a goal ever since his first match that could see him bounce back to maintain his side as our prime choice.

Jerry Mawhminghthanga (8.0 Cr).was able to showcase a focused form in the last match which showed his brilliant boosting form that can continue to improve his performance.

D. Mauricio is our captain because of his goal-scoring form that can keep him motivated to continue with a similar tenacity.

C.Javier is our vice-captain because of his performance in the recent games which shows his ability to perform well under pressure. 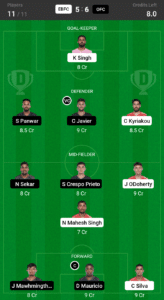 The veracity of our selections and team is based on earnest analysis of the league, matches and playing 11s. We implore you to forage your team by your own accord with these facets helping spur your decision making.