Who is Hadi Matar? Who is Salman Rushdie’s attacker and where is he from? Salman Rushdie, whose novel “The Satanic Verses” drew death threats from Iran’s leader in the 1980s, was stabbed in the neck and abdomen Friday by a man, Hadi Matar, who rushed the stage as the author was about to give a lecture in western New York. 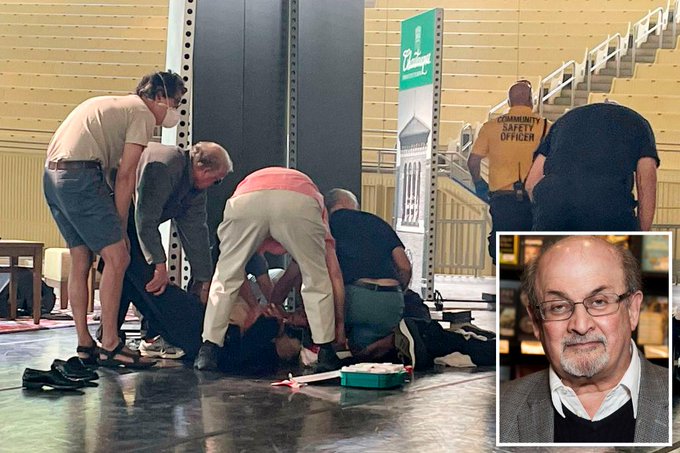 The suspect, 24-year-old Hadi Matar, was born in California, but recently moved to New Jersey, according to law enforcement sources familiar with the investigation. His last listed address was in Fairview, a Bergen County borough just across the Hudson River from Manhattan. FBI officials were seen going into the home of Matar Friday evening. But according to reports, Matar may have had Iranian sympathies.

Here is all that is known about him:

01- According to a report by NBC News, sources familiar with the investigation said the suspect was born in California but recently relocated to New Jersey. His last known address was in Fairview, a borough of Bergen County just across the Hudson River from Manhattan. On Friday evening, FBI agents were seen entering Matar’s home.

02- The report quoted sources as saying that Matar also had a forged New Jersey driver’s licence on him.

03- Maj. Eugene Staniszewski of the State Police said the motive for the stabbing was unknown. According to a law enforcement source with direct knowledge of the investigation, a preliminary review of Matar’s social media accounts revealed that he is sympathetic to Shia extremism and Islamic Revolutionary Guard Corps causes, the NBC report stated. There are no definitive links to the IRGC, but the official believes his initial assessment indicates he is sympathetic to the Iranian government group.

04- Spectator Kathleen Jones described the attacker as wearing all black and wearing a black mask. We thought it was a stunt to show that there is still a lot of controversy surrounding this author. But it was clear in a matter of second that it wasn’t, she said.

05- Matar was arrested by a New York State Trooper after Rushdie was pushed or fell to the floor, and he was awaiting arraignment. It was unclear what charges he would face in connection with the attack on the author, whose novel “The Satanic Verses” drew death threats from Iran’s leader in the 1980s.

1947 – Born in Mumbai, India
Rushdie was born in what was then called Bombay, in the year of the partition of India, to a Kashmiri Muslim family. His father was a lawyer before going into business, and his mother was a teacher. He attended school in India and England, before studying history at the University of Cambridge.

1981 – Midnight’s Children
Six years after his first novel, Grimus, was published to little fanfare, his second work shot him to literary fame. Midnight’s Children, a faux autobiography that follows a magical child born at the stroke of midnight as India gained independence, became a bestseller and won the Booker prize in 1981.

1988 – The Satanic Verses
Rushdie’s fourth novel was published in the UK seven years after Midnight’s Children, with a plot partly inspired by the life of the prophet Muhammad. It was a Booker prize finalist and a Costa award winner but was described as blasphemous by many Muslims for its portrayal of Islam.

February 1989 – Fatwa issued
Ayatollah Ruhollah Khomeini, the supreme leader of Iran, later issued an edict calling for Rushdie’s assassination. Khomeini urged “all brave Muslims” to kill Rushdie and his publishers, with the author then placed under police protection in Britain for nine years – and a resultant diplomatic breakdown between Iran and Britain.

August 1989 – First attempted killing
A bomb was planted in the Beverley House hotel in central London by Mustafa Mazeh, a Lebanese man. However, it went off while Mazeh was priming the explosive, killing him. .

1991 – Translator murdered
Hitoshi Igarashi, who translated The Satanic Verses into Japanese, was stabbed to death in his office at the University of Tsukuba in Japan. The assailant was never identified.

1998 – Iran partly backtracks
When Mohammad Khatami took over as Iran’s supreme leader, he declared the Iranian government would neither “support nor hinder” the killing of Rushdie, in order to try to ease the diplomatic relationship with the UK.

2007 – Knighthood
Rushdie was knighted for services to literature in in June. He said at the time: “I am thrilled and humbled to receive this great honour, and am very grateful that my work has been recognised in this way.” The knighthood sparked protests across the Muslim world, with Pakistan and Iran protesting formally by returning their British envoys.

2012 – Cancels appearance at literary festival
Rushdie was due to appear at the Jaipur literature festival in India but he cancelled, fearing for his life after he was warned by police that assassins had been sent to kill him.

2022 – New York attack
Rushdie was stabbed in the neck while on stage at an event in Chautauqua, New York. Police said the suspect was restrained and in custody.